'Homer Can Help You': War Veterans Use Ancient Epics to Cope 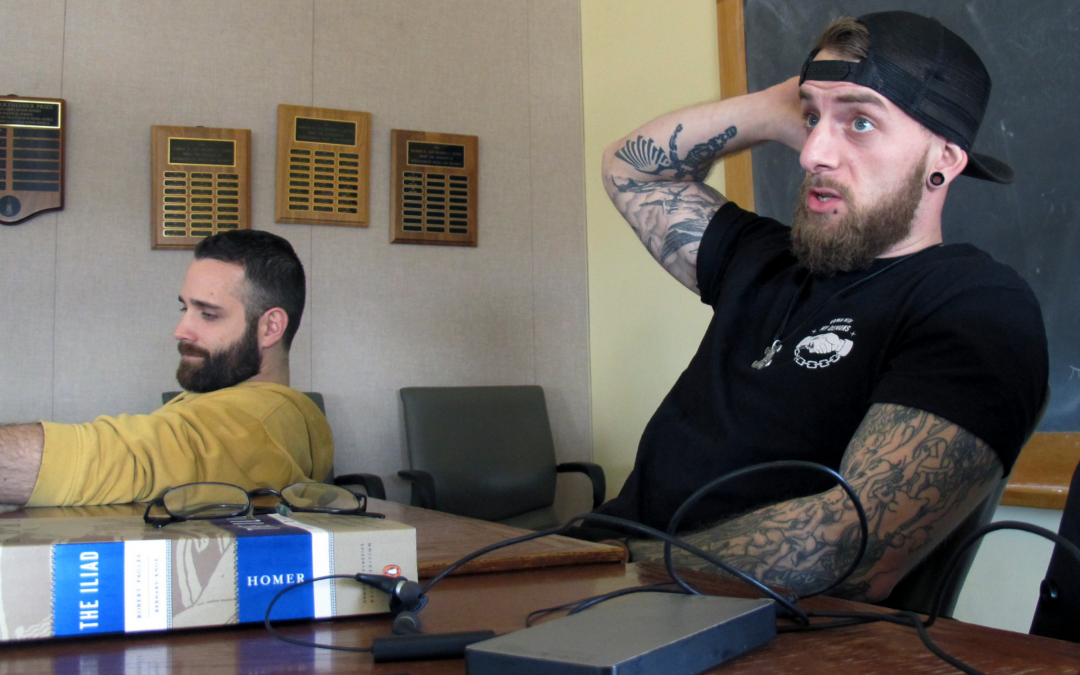 BURLINGTON, Vt. (AP) — The trials of Odysseus are really not that different from the struggles of those learning to readjust after wars of today, modern veterans are finding.

A small group of military veterans has been meeting weekly in a classroom at the University of Vermont to discuss “The Iliad” and “The Odyssey” for college credit — and to give meaning to their own experiences, equating the close-order discipline of men who fought with spears, swords and shields to that of men and women who do battle these days with laser-guided munitions.

Homer isn’t just for student veterans. Discussion groups are also being offered at veterans centers in New Hampshire and Massachusetts. The Maine Humanities Council has sponsored sessions for veterans incarcerated at Maine’s Kennebec County jail, as well as for other veterans.

For many in the UVM class, Homer’s 2,800-year-old verses seem all too familiar: the siege of Troy, the difficult quest of Odysseus to return home after 10 years at war, his anguish at watching friends die, and his problems readjusting to civilian life.

Stephanie Wobby, 26, a former Army medic originally from Sacramento, California, is a combat veteran who served in both Iraq and Afghanistan and is one of two women in the UVM course; she has been to traditional post-traumatic stress therapy sessions, but said, “This is far more effective for me.”

“It still resonates, coming home from war, even if it was however many years ago,” said Wobby, a junior majoring in chemistry. “It’s the same.”

In a recent class, Dan Wright, 26, an Afghanistan veteran and UVM junior, wore a T-shirt bearing the slogan “Down with my Demons” while the group discussed “The Iliad.”

“It was talking about being scared to die and, like, when you are on the field, don’t think about it,” said Wright, 26, of Halifax, Vermont. He said he was involved in near-daily firefights during a nine-month combat tour in Afghanistan in 2012.

Enrollment in the class taught by John Franklin, an associate professor of classics, is limited to veterans; the current class includes veterans from wars in Vietnam, Iraq and Afghanistan. There are no papers or tests, and the grade is based entirely on class participation and an understanding of the material.

The people who work with the veterans at UVM felt it was a tragedy when they heard last week that a former Army rifleman expelled from a program to treat veterans with PTSD took three women hostage in California and fatally shot them. With Homer they are working to avoid the idea of the damaged veteran, said David Carlson, the coordinator of student veterans’ services at UVM and a Marine veteran of Iraq in 2005 and 2006 who sits in on the classes.

“From my end, all it does is make me think the work we do with veterans every day is that much more important,” Carlson said.

Homer-for-veterans is the brainchild of Dartmouth College classics professor Roberta Stewart, who is now hoping for a grant that will allow her to expand the idea nationwide.

Stewart read some blog posts by U.S. service members fighting in Iraq in 2003. She recognized their graphic descriptions of war and the difficulties many faced readjusting to life after combat, and reached out to one veteran who appeared to be having a hard time.

“I said to him, ‘Homer can help you. Homer knows,'” Stewart said.

Stewart never heard back from the veteran she told about Homer, but the light bulb stayed on. A decade ago, she wrote to the Department for Veterans Affairs hospital in White River Junction, Vermont, suggesting the idea. Officials were skeptical at first, but she eventually won and started her first group.

“Using Homer, because of the distance involved and also it’s great storytelling, is a way to break into those experiences,” Hunt said.

In its different guises at the locations where classes and discussions have been offered, veterans from World War II to those just home from Afghanistan have seen themselves in the struggles described by Homer.

“It was no different then, the soldiers coming home war from war and dealing with these issues than it is now,” said Norman “Ziggy” Lawrence, of Albion, Maine, a Vietnam-era veteran who now leads some of the discussion with jailed Maine veterans. “It opens that avenue so that they can speak to issues that they are having.”

Copyright (2018) Associated Press. All rights reserved. This material may not be published, broadcast, rewritten, or redistributed.

This article was written by Wilson Ring from The Associated Press and was legally licensed through the NewsCred publisher network. Please direct all licensing questions to [email protected].