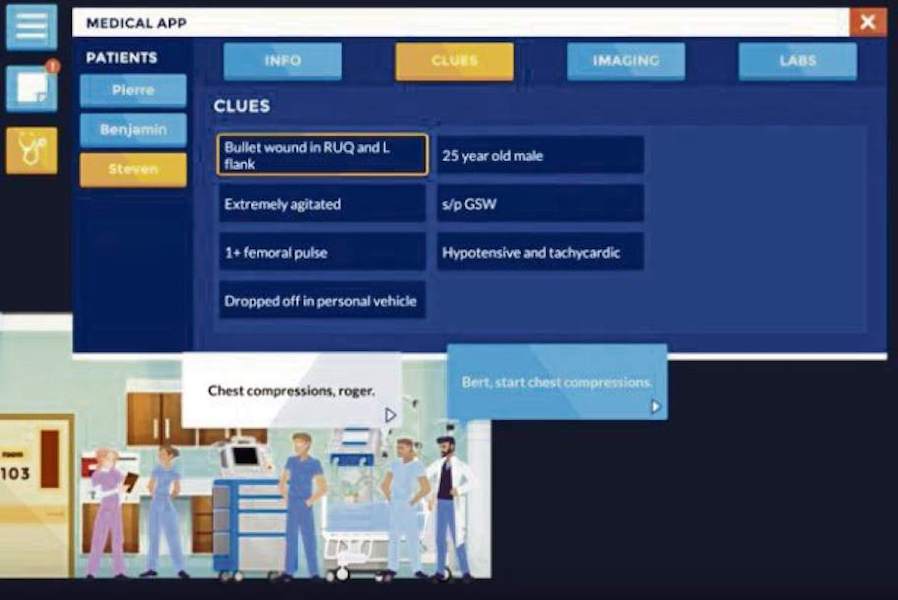 Doctors didn’t enjoy playing a video game simulation of prioritizing patient treatment at a community hospital, but it helped them improve.

That’s the finding of a new study led by a University of Pittsburgh School of Medicine doctor who examined how to better train physicians to recognize patients in need of higher levels of care.

Dr. Deepika Mohan, an assistant professor in Pitt’s departments of Critical Care Medicine and Surgery, worked with Schell Games, a Pittsburgh-based video game company, to create Night Shift. While playing the game, real doctors direct a fictitious young physician in a small, community hospital who must use clues to treat patients and determine which ones need urgent, higher levels of care for serious injuries.

“These are decisions that happen under conditions and time pressure and uncertainty,” said Mohan, the lead researcher on the trial. “But these decisions really matter.”

Mohan’s work was published Wednesday by The BMJ medical journal.

Patients with severe injuries who are treated at trauma centers have a 25 percent lower chance of dying, reduced disability and pain after they’re discharged and better prospects for returning to work, Mohan said. However, 55 percent to 80 percent of patients with severe injuries who initially visit a non-trauma center aren’t transferred to facilities equipped to provide the proper care. This results in 30,000 preventable deaths a year, Mohan said.

For the study, Mohan recruited 368 emergency medicine physicians who worked at hospitals without trauma specialization. Half played Night Shift. Half read and studied traditional training materials.

Doctors, however, didn’t like playing the video game. Many complained that it was frivolous and a waste of time. The doctors who had the traditional training, on the other hand, loved their materials and some spent more time than necessary with them.

“I was ecstatic,” Mohan said about the findings. “Despite the fact the people did not enjoy it, they still out performed.”

Mohan said she does not think her video game or any video game will ever replace real-life training.

“There is nothing that can take the place of spending time at the bedside,” Mohan said.

This article is written by Aaron Aupperlee from The Pittsburgh Tribune-Review and was legally licensed via the Tribune Content Agency through the NewsCred publisher network. Please direct all licensing questions to [email protected].

© Copyright 2018 The Pittsburgh Tribune-Review. All rights reserved. This material may not be published, broadcast, rewritten or redistributed.