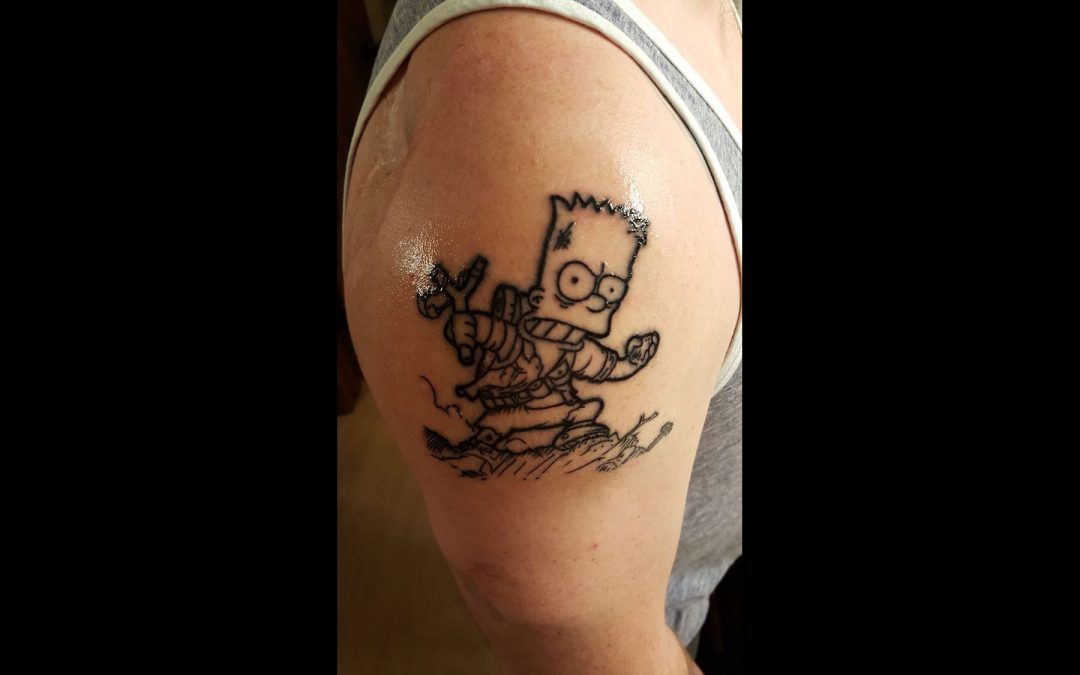 NAMPA, Idaho (AP) — Jeff Myers spent years working in a four-fingered universe as an animator on “The Simpsons” but he’s still up for some pro bono design work for a Treasure Valley veteran looking for a Bart Simpson tattoo.

“The Simpsons” defined a generation of kids, including Matt Watson, a Nampa High School graduate who was injured while serving in Iraq in 2003. For years Watson has wanted a tattoo commemorating his love for the show.

“But I didn’t know who I would have draw Bart Simpson for me,” Watson said.

Conveniently, an animator with the proper credentials was available and volunteering at a Wyakin Foundation event for wounded veterans.

“It was just kind of cool knowing that (Myers) drew for a show that I had watched growing up and that I was going to have this tattoo drawn by one of the people who worked on that show,” Watson said.

Myers, the artist behind Watson’s tattoo and a number of genre-defining shows, lives in Nampa in a house paid for in part by the work he’s done at 742 Evergreen Terrace. His career has taken him to Arlen, Texas, O-Town, the multiverse and a number of fictional worlds he’s had a hand in creating through more than three decades as an animator.

“People of my generation, they think of Bart Simpson. Someone a little bit younger? It’s ‘Family Guy’ and ‘King of the Hill,'” Bacon said. “And somebody of the younger generation? When you say ‘Rick and Morty,’ their eyes get all big. He’s got a cartoon for every generation.”

Myers has worked on all of them, as well as “Rocko’s Modern Life” and “Little Dracula.” He’s now doing animations for the newest project from “Simpsons” creator Matt Groening.

To do all that, however, Myers needs to fly to an animation studio in Burbank, California — a weekly commute that’s made him an airport security wizard with a surplus of frequent flier miles.

“It’s a drag of a commute. I don’t recommend it,” Myers quipped.

CalArts is known for its alumni roster of animators. Myers is similarly a graduate of the California Institute of the Arts but he didn’t arrive on campus with animation ambitions.

“I did everything but animation,” Myers said, adding that he wondered how it was artists could stand to draw the same thing over and over.

But CalArts is also known for its Halloween parties.

“They were huge events where they’d bring in big-name acts and so I got into that helping to build sets and that got me into the theater department doing props and sets and using my hands,” Myers said.

The theater department put him in the company of animators and eventually into the animation school.

“The school was split in two. One they were kind of grooming kids for Disney and the other is kind of experimental — those were the cool guys. So I hung out with them.”

The experimental school was the type of place where, as one graduate did, you could dream up a pantaloon-ed sponge that lived in a pineapple at the bottom of the sea.

Myers’ work in the experimental school set him up for a career in shows that may not have been Disney at the time but developed similar stature in the decades to follow. He recalls how “The Simpsons” was initially received in its early years when kids like Watson were falling in love with it.

“It was risky when it first came on, even in California. There were a lot of people that thought, ‘Oh, that Bart’s a bad influence,'” Myers said.

Myers started doing background art for “The Simpsons.” He’d watch episodes and find himself pointing out drainage ditches he’d drawn. On other shows, though, Myers remembers a less-structured process where he had more control.

“‘Rocko’s Modern Life’ was probably the most fun to do as a whole because we would just try to make each other laugh all day,” Myers said.

That show, which followed the adventures of an Australian expatriate wallaby, was produced “old school.” The process was built on storyboards, giving artists like Myers freedom to create plot points and jokes.

“The writers would give us the theme and we would come up with the majority of the gags and the dialogue and of course draw the whole thing out,” Myers said. “It’s risky, from a money standpoint.”

Storyboarding looks much different than it did when Myers was getting started. Myers now works on a giant tablet. The digital push has shortened production schedules, asking more of animators.

“You’re like a mini director. A lot of companies kind of expect you to make animatics, little movies of what you’re doing,” Myers said. But it’s not all bad. Myers isn’t longing for the halcyon days of paper and pencil now that “there’s a wonderful thing called ‘undo.'”

If something looks wrong, a few key strokes gives the animator a second or third shot. That’s not how mistakes were fixed when Myers started out.

“Say you draw a character and the head is too big? In the old days you would have to walk to the Xerox machine, guess the size, get it right. Then hold the two papers up to the window, looking through them to get that right and, if you’re doing it for animation, you’d have to splice that new drawing into the old drawing paper because you couldn’t have more than one thickness. Otherwise, you’d show the light difference because everything was under-lit paper back then.”

Like many fans, Matt Watson, the veteran with the Bart Simpson tattoo, has a tough time picking a favorite “Simpsons” episode. But if asked, he’ll say Homer Cubed — a Halloween short from “Treehouse of Horror VI” in which Homer stumbles from his two-dimensional world into a universe with “a hypothetical Y-axis,” as Professor Frink explains.

The episode ends with Homer landing in a dumpster near West Hollywood — about a 20-minute drive from Myers’ office at Rough Draft Studios in Burbank. California is still the best place for Myers to pursue his 2D craft, even if it’s away from family.

“The life of a storyboard artist is a little bit of living in a cave, pushing a pen around,” he said.

But his 3D world, beyond the animation studio, is back in Nampa — a weekly flight separates the two. Myers grew up in California but started to look at the Treasure Valley at the encouragement of his brother-in-law, who moved to the area during the housing boom of the mid-2000s. Myers followed a few years later with his wife and two children.

“This, to me, is how California was back when I grew up as far as the neighborhood-ness. The mellow vibe,” Myers said. “You could smile at people and they’ll smile back where as if you wave at someone in L.A. they think you’re on something.”

The contrast between Myers’ 2D world in California and his life in Nampa, as Professor Frink explains in Watson’s favorite episode, “should be obvious to even the most dim-witted individual who holds an advanced degree in hyperbolic topology.”

This article was written by Tom Hesse from The Associated Press and was legally licensed through the NewsCred publisher network. Please direct all licensing questions to [email protected].